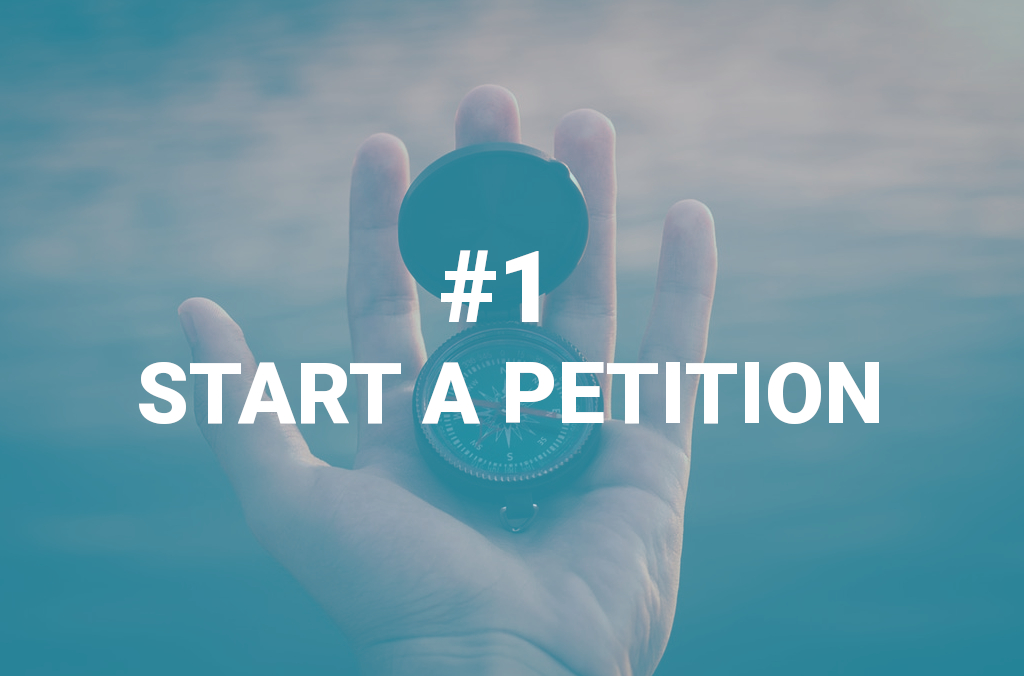 The title is the first thing others will see of your petition. It should make it clear at a glance what your request is and arouse your curiosity. Without a good title, the most important issue goes unnoticed.

"It's five past twelve. Better framework conditions for elementary schools now!" – Clear and unambiguous. Recalls the phrase 'It is five to twelve' and makes clear the enormous urgency of the matter. So you have a catchphrase for a campaign and a high recognition value in the media.

"Bivsi and her parents are supposed to go back to Germany" – Short and direct. The title doesn't say everything and makes you curious to find out more about the background.

"Death penalty for pastor in Iran" – Formulated ambiguously: what was demanded was the release of the clergyman, not the death penalty.

"Protest against the EU directive RL 2010/63 / EU" – What may it be? Very few people should know this administrative abbreviation. Cats and dogs that are picked up in the wild should be able to be handed over to animal testing laboratories - that is what it is about and that should be immediately recognizable in the title.

Under no circumstances should your petition go online without a picture, because the first look counts. Supporters and journalists alike will pay more attention to an appealing, well-thought-out petition than to a hastily drawn-up petition without a picture. People think in pictures - and like to spread them. For a correct display, upload an image in landscape format with an aspect ratio of 3: 2. If the aspect ratio is incorrect, you can easily crop the image automatically after uploading it. Please make sure that you are using images for which you are familiar with the licenses. Images on these pages, for example, are license-free: https://pixabay.com and https://unsplash.com. We are liable for the content on this portal and reserve the right to delete images that are not properly marked.

Choose an active, strong gesture for the motif behind which many people can gather.

You want to actively change something: if you show an inspiring role model, many will want to join you. Show that your cause is mobilizing!

Tell a personal story - focus on those affected

We can instantly establish a relationship with the affliction and actions of a single person.

Show a symbol for something intangible

If your concern is invisible, such as framework conditions in the education system or tuition fees, use a symbol that makes the problem or its urgency tangible. Make the problem clearer with a comparison or translate expressions into pictures. A ringing alarm clock in conjunction with the petition title 'It's five past twelve. Better framework conditions for primary schools now! ' makes it clear how acute the petitioners' request is. The use of logos with a high recognition value is also good.

The text is at the heart of the petition. Here you explain your request and can convince other people of your concern. Your request should be as specific as possible. In the first section you answer the following questions: What exactly do you want to achieve? Who is the request addressed to? Who is behind the demand?

Under “Justification” you can explain exactly why your concern is important. Describe the current situation and why it needs to be changed. Make it clear how the claim would affect it. Here you can also share individual examples or your individual experience. The justification shouldn't be too long. It is worthwhile to offer further information on a separate page or on Facebook and to notify the supporters about this via the news function. The reasons for your petition should be logically understandable. It is important that you refer to the current legal situation.

Your petition will be more convincing if you have sources to back up your statements. To do this, include links to articles or studies. Pay close attention to the seriousness of the sources, otherwise the whole petition will be implausible. It should be clear when you are expressing your personal opinion in the petition (eg "I have the impression that ...") and when you are arguing on the basis of facts (insert reliable evidence at these points). In any case, avoid presenting your personal opinion as fact.

A petition is not a novel, it is a well-founded request. Pay attention to spelling, grammar, and punctuation, and use clear, simple language.

The addressees of your petition are the ones who can decide on your request. If you direct your demands to someone who is not responsible for them, you will achieve nothing. That is why you have to think carefully beforehand who the right recipients are: specific persons, a parliament or an organization from politics, business or society.

Entries like “Merkel”, “Authority” or “All” make little sense. In principle, it makes sense to submit your request to the petitions committee of the relevant level, e.g. 'Petitions Committee of the German Bundestag'. More on this… .

The region of the petition depends on the group of people affected and the recipient. Does the concern affect people in the city of Barcelona, in the Styria region or in all of Poland? For example, if a petition is addressed to the BBC with a demand relating to television programming, London is not the region. Even if the BBC is based there, Great Britain must be registered as a region because the television program covers the whole of Great Britain.

Is the concern acute because the crucial city council meeting is about to take place in a week? Or are you working towards an event in two months? Petitions on openPetition should not run for more than a year. Longer terms distort a concern and its acute urgency. It makes a big difference whether 1,000 signatures are collected over a year or in a week.

Petitions to non-governmental bodies, such as a television broadcaster, a bank or a private company, have a freely definable collection target. A petition should have a meaningful collection goal. That is, high enough to build up public pressure, but realistically achievable. A goal that is unattainable high is demotivating, a goal that is too low gives the impression that you don't even have to make an effort (and don't even have to sign it). This amount varies depending on how large the group of people affected by the matter is. In a small community, a few hundred signatures are a large number. A minimum of 10,000 should be aimed for for national concerns.

After creating the petition, the next step comes: # 2 Petition spread