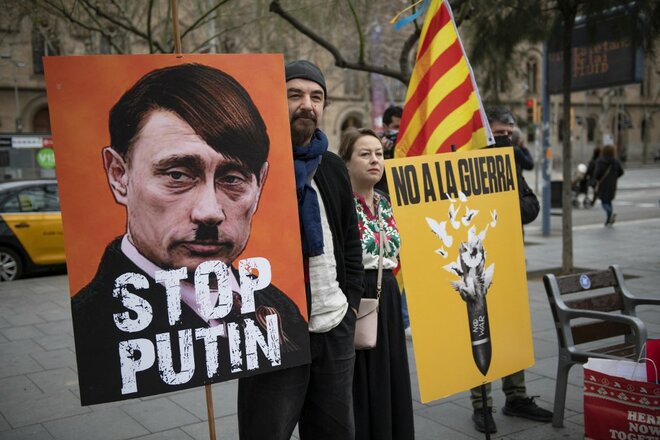 Kick russia from the United Nations Security Council and the OSCE!

On February 24, 2022, the russian federation began a merciless war. Hundreds of thousands of Ukrainians lost their homes, dozens of thousands - relatives and close friends, hundreds - their innocent children. The brutal genocide of our people is an obvious example of the fact that russia does not belong among the civilized world, especially as a country with an influential position in the international arena.

We appeal to everyone who believes in good and justice, who cannot stand violence, rapes, and merciless killings of defenseless women, children, and the elderly, the destruction of cities and towns, and the left bloody stain on the destinies of generations.

Let's restore peace and stability! Down with the russian violence! Kick the aggressor from the UN Security Council and OSCE!

During the 2022 Russian invasion of Ukraine, Russian authorities and armed forces have committed war crimes by carrying out both deliberate attacks against civilian targets and indiscriminate attacks in densely populated areas. The Russian military exposed the civilian population to unnecessary and disproportionate harm by using cluster munitions and by firing other explosive weapons with wide-area effects such as bombs, missiles, heavy artillery shells and multiple launch rockets. The result of the Russian forces' attacks has been damage and destruction to civilian buildings including houses, hospitals, schools, kindergartens, nuclear power plants, historic buildings, and churches. As of the beginning of July, the attacks had resulted in the death of nearly 5,000 civilians including 335 children.

Thank you for your support, Vadim Nesterenko from Kyiv,
Question to the initiator
openpetition.eu/!yphlr

Because of Russian federation killing my friends and relatives. RF is murders. We need isolate them.

Hi, I've lost my ordinary life and had to flee from my home city, Kharkiv, Ukraine not being killed under missile attacks. Each month during the war I am getting to know that people I met in person are dying or getting injured being fought in the front line.

The data refers to 23 statements.