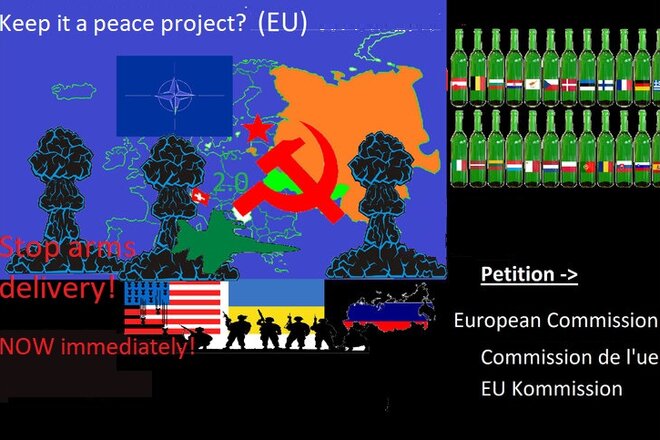 An arms export embargo for these states similar to the one that existed in the case of Cyprus is also necessary! The European Union is a peace project. Warmongering has no place here! We explicitly do not want Europe to sink back into death and chaos.

Over the last two decades, the European Union (EU) has repeatedly been dubbed a "peace project". Some didnt really believe it (because of the Iraq war for example), others believed in it seriously.

Freedom of travel was often praised. But: Whatever one's opinion of the European community of values the time of the peace project and the freedom of travel are seriously endangered!

The European Union is threatening to collapse and slide into war! It makes no difference whether former EU states or non-EU member states participate in the CEE region with arms supplies or not. However, it must NEVER be tolerated that weapons are supplied to war parties no matter what kind.

Not only is it wrong for the EU to support a war by supplying weapons but it is also wrong to interfere militarily in the affairs of non-EU states!

Although it has always been said that we don't do such things. As an example the EU should not be a debt union. Now the European Commission is again acting outside the self-imposed rules and interfering in a conflict of two neighbouring states of the post-Soviet space.

The European Union introduced a "European Code of Conduct on Arms Exports" in 1998.

In August 2022, Amnesty International (a non-profit organization that promotes human rights) stated that the Ukrainian army was "[...]Using hospitals for military purposes[...]" which "[...]is a clear violation of international humanitarian law[...]".

It should be said that Amnesty International has already pointed out violations of international humanitarian law with regard to the USA, China (e.g. capital punishment) and Russia (war related) where misconduct had been reported aswell by Amnesty.

Therefore this organization can be considered neutral.

To come back to the code of conduct: One of the criteria, that had been defined by the EU statets was "2.  Criterion Two: Respect for human rights in the country of final destination as well as respect by that country of international humanitarian law.".

How can it therefore be justifiable to supply weapons to this country?

This is clearly a violation of the EU Code of Conduct on Arms Exports.

Is that clever? Shouldn't one at least honestly ask the people (hold a referendum) before setting such actions?

The purpose of this petition is to give citizens of the entire European Union the opportunity to veto the decision and to remind the Commission that the member states have committed themselves to keeping the peace.

While I am not aware if there has been anything like this before EU states supplying arms to a non-EU state.

But never before has the participation for a war in every single state of the European Union been so numerous as this time! I find that alarming.

How do you see it?

As far as I'm oncerned, this is strictly a war between the US and Russia. We Europeans have little or nothing to do with it so we must not allow ourselves to be dragged into this mess. That is however exactly what we're doing by pumping Ukraine full of weapons, particularly now that a half-decent stage for a stalemate has been reached.

Because I believe that arming Ukraine is worsening this problem