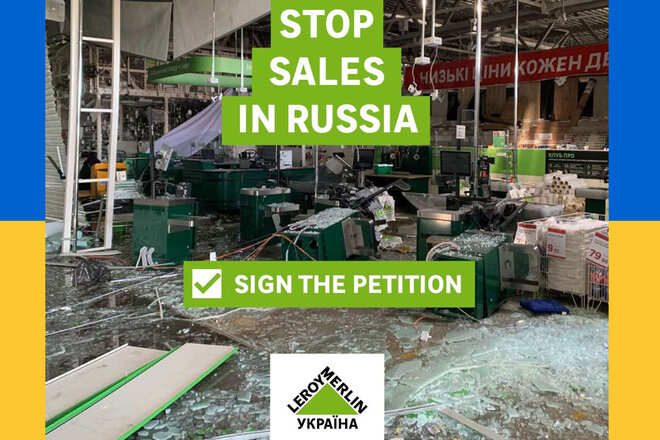 From the first day of war, that Russia launched against Ukraine on the 24-th of February 2022, Leroy Merlin stores in Ukraine closed their doors to customers and started the only activity of processing the requests from the Armed Forces of Ukraine, Troops of territory defense and volunteers, providing free of charge equipment and strategic goods for organization and fortification of block-posts, bomb shelters and other facilities for protection against aggressive actions of the russian occupiers and sabotage groups.

At the same time Leroy Merlin employees in Ukraine were informed on the decision of the ADEO Group to continue commercial activities in russian federation (Leroy Merlin russia).

Leroy Merlin russia is one of the top-10 largest taxpayers to the russian state budget.

Each working day of Leroy Merlin russia, each ruble paid to the state budget of russia in the form of taxes, help aggressor to supply its army and kill even more Ukrainian people, among which pregnant women and kids, some of them are still located on occupied territories under humanitarian crisis.

In addition, it should be noted that the ADEO Group (parent company of Leroy Merlin) is the part of Association Familiale Mulliez (AFM) – holding company of Mulliez family, one of the richest family business empires in France. Among others, AFM owns such companies as Auchan and Decathlon, which also continue their commercial activities in russia. Summing up all the taxes paid by these three companies in russia, the corporation will have even greater financial contribution to the country-aggressor's state budget.

ADEO Group's position about solidarity with all employees, including russian employees, does not withstand any criticism, because such significant financial support of the country-murderer is nothing but support of the crime against 42 million Ukrainians.

Despite the escalation of hostilities from the side of russia and, as a result, the uncontrollable increase in deaths of Ukrainians from air and missile strikes, it is planned to expand product range and job positions in Leroy Merlin russia, thus even more support of the terrorist-economy to continue their aggressive war.

"Human above all", "Human is the heart of the company" – aren't those the most important principles, taken by the ADEO Group as the basis of all its activities, and declared as the main values of the corporation to all employees of Leroy Merlin Ukraine and employees of the whole Group in the World!?

We want to believe that ADEO has remained true to its principles.

- We are the citizens of Ukraine, who are forced now to defend our country, our lives, the lives of our children, relatives and friends,

- We are the citizens of the European Union and other democratic countries of the World, who are first of all PEOPLE, who demonstrate to the whole World the ability to defend human and democratic values,

– WE ALL strongly urge ADEO GROUP and AFM to stop business in russia, which in turn will deprive the aggressor's opportunity to finance hostilities and mass murders in Ukraine.

We want to be heard, understood and responded from the level of Adeo Group leaders and the Association Familiale Mulliez (AFM) both.

Help us, help the whole World to restrain the aggressor, stop business in russian federation! Prove to the whole World that global human values: preservation of human life, decency, honesty, dignity and empathy are higher than financial results, turnover and money!

below you will find the link with UA, FR and EN translation of this document

Thank you for your support, Leroy Merlin Ukraine from , Kyiv
Question to the initiator
openpetition.eu/!vczyd