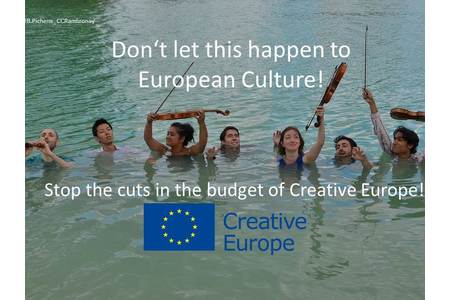 Petitioner not public
Petition is directed to
European Parliament
107 Supporters 106 in Europäische Union
Petitioner did not submit the petition.

European Council has proposed to cut 6 million Euro from the budget of the Cultural programme Creative Europe although the Committee on Culture and Education (CULT) proposed an increase in funding up to 15 million Euro to help support a greater proportion of grant applicants into the future.

Not only are numerous cultural project put in danger, but also the future of the European Union.

We live in crucial times with regard to the development of the European Union. Decisions taken today will affect our future lives as citizens.

As artists and creative professionals, we believe in the power of Culture in bringing people of different backgrounds together to create a strong European Identity. The programme “Creative Europe” has changed our institutions and professional lives. We have found new friends and partnerships which educate, and bind us together, to the very positive benefit of our local communities.

The Committee on Culture and Education (CULT) obviously share our views and proposed an increase in funding for Creative Europe of up to 15 million Euro to help support a greater proportion of grant applicants into the future. The success rate of applications to the Creative Europe programme in 2016 was around 11 % – not because there were no good ideas. Not because the applications didn’t fulfil the requirements. Simply because there was no more money.

However, the European Council did not follow this proposal, but in turn proposed to cut 6 million Euros within the budget of the programme.

What this means in practice is that Europe has a body of institutions/professionals with proven ideas, partnerships and knowledge on how to strengthen the community through culture – helping to fight nationalist and populist propaganda and creating a common ground of genuinely shared European values – which just cannot function without monetary support.
The European Council does not seem recognise the enormous potential of the programme and knowingly or unknowingly threatens to destroy a vital means of supporting the European ideal in respect to intercultural understanding, cultural heritage, but also in respect to the economy. Creative Europe is not least a programme which has the aim and the potential to provide an additional spark to the fast growing sector of creative industries, but has already motivated artists all over Europe to a more entrepreneurial way of thinking in the best interest of European Economy.

We are creative professionals who necessarily plan far ahead with proven track records of success anxious to make the most of the opportunities presented by Creative Europe 2018-2021. The decision process of the democratic bodies of the European Union is at times desperately slow, and the processes notoriously cumbersome, yet we, and many of our colleagues, have created outstanding projects – bringing together people of all ages, regardless of language barriers, to celebrate the common European heritage.

Please reconsider the proposal to reduce the funds for Creative Europe. Encourage us and all other citizens of Europe to be bold, creative and visionary in the interest of Europe. If you are serious about uniting Europe, do not strengthen those who build up walls rather strengthen those who tear them down. Help us to help you to create a European Unity and Identity. Increase the funds for Culture. Accelerate the decision processes to give ideas the necessary time and space to grow and blossom. You can rely on the deep-felt gratitude of artists, creative professionals and future generations of European citizens by supporting this proposal. Help to bring creative solutions to European problems.

The initiators of this appeal are partners of the European creative scholarship programme eeemerging (www.eeemerging.eu) which has brought together festivals and institutions to support the professional development of emerging musicians as they step from academia into the market place. These young people are the life blood of the next generation of teachers, performers and creatives whose music-making spreads harmony across the community. However, the aim of this appeal is much more open and addresses every European citizen who believes in the power and necessity of culture.

Thank you for your support
openpetition.eu/!creativeeurope 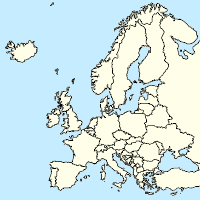 The data refers to 52 statements.