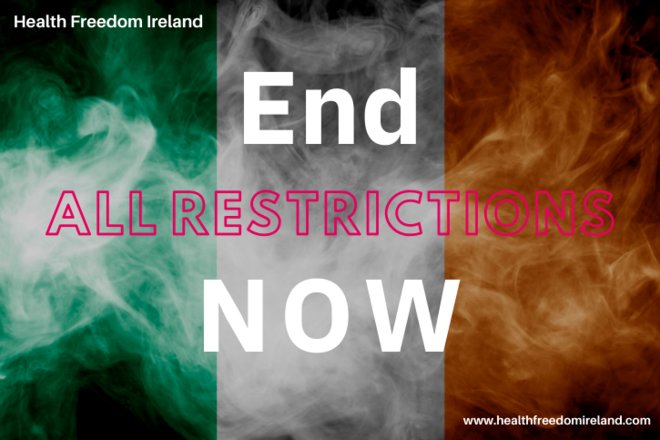 Petitioner not public
Petition is directed to
Leo Varadkar
975 953 in Ireland
Petitioner did not submit the petition.

We call on the Irish government to end the enforced restrictions and lock down of the people of Ireland without any conditions.

Protecting Our Vulnerable Citizens Is something we fully support should they so wish, along with the advice that anyone who displays any cold like symptoms stays at home until symptoms have abated.

Constitutional Rights We do not consent to the government’s removal of our constitutional rights including the right to privacy, freedom to associate, travel, assemble in public, interact socially, earn a living and freedom from arbitrary detention.

World Health Organisation (WHO) The government’s actions have been based on the pronouncements of an unelected health authority, the WHO, and a predictive model by the Royal Imperial College London that was never peer reviewed [1] and was later found to have greatly overestimated the mortality rate. The WHO and The Royal Imperial College are not independent authorities solely backed by nations. They are funded by private corporations and individuals, many with pharmaceutical ties [2].

Actual Mortality Rate Of COVID-19 As a nation, we have done as requested to mitigate the impact of the novel virus COVID-19 on our already beleaguered health system. The evidence no longer supports the crashing of our economy with the entailed loss of jobs nor the isolation, desolation and destruction of our societal structure.

There is no evidence of air-borne transmission [3]. Therefore the need for restrictions beyond hand-washing, respiratory hygiene and cleaning surfaces is unwarranted.

Emerging evidence points to this virus having a similar mortality rate to seasonal influenza as can be seen in the recent Stanford University antibody study which puts the fatality of those infected with COVID-19 at 0.1-0.2% [4]. This is borne out also when countries' mortality rates for for COVID-19 are compared to previous years influenza mortality rates e.g. The UK reports 44,000 [5] flu deaths for 2014/2015 compared to 28,734 deaths being attributed currently to COVID-19 [6]. Similar can be seen for Italy [6][7].

Individual's constitutional rights have been removed on the basis of a hypothesis. Previous novel viruses in the past (e.g.H1N1) have not warranted this approach.

Trauma Caused By Social Isolation The death of a loved one is traumatic at any time. It is even more so now as they die alone, terrified and without the comfort of loved ones, even if they do not have COVID-19. Does the data support these extreme measures?

Cause Of Death Reporting Has changed so we now no longer have true data with which to work. Deaths are being declared as COVID-19 without laboratory confirmation. The leading cause of death is being recorded as COVID-19 for those that had life threatening previous illness and were susceptible to die of many opportunistic infections. Why the change [8]?

The above means that the number of deaths is exaggerated for COVID-19. Even with these inflated numbers the overall rate may be lower than historical records for this time of year, according to European mortality monitoring activity [9].

The Fear Factor Is being used reprehensibly by the government and mainstream media to control the people of Ireland. Italy is being used as a terror story to justify the removal of constitutional rights. It is not being widely reported that in Italy 99% of those who died had an underlying health condition that was known [10] and that the average age of the deceased is over 80 years [11].

Why do the government and media not report the number of recoveries both here in Ireland and worldwide? Currently (12/05) 1,575,629 have recovered worldwide as compared to 252,675 deaths out of a population of 7 billion [6].

Co-factors must be considered. Dr Marcus de Brun points out that one significant differing cofactor between the UK and Ireland is that the UK has 12 million residents over the age of 65 while Ireland has 675 thousand [13].

Since only the sick are being tested, we do not know how many have already had the virus and were asymptomatic. This means that the rate of morbidity (death rate) is artificially high as it is calculated by dividing the number of deaths by the number infected (which could be an unknown under-estimate) [4][14]. Fear is being driven by the reporting in the media of children dying of COVID-19. Media reports are misleading in that many have serious preconditions, e.g. leukaemia, Kawasaki disease, sometimes undiagnosed and some deaths are being misrepresented [15].

What Is The Rationale For Lockdown? What is the rationale for quarantining healthy people on a long term basis? The curve has been flattened.

To prolong this experiment, the government needs to have strong evidence to back its decision.

If the government has evidence to back its decision, it needs to share it with the public.

Many experts worldwide are questioning the panic and governmental reactions of locking up their countrymen. See summarised statements from 30 such worldwide experts openly questioning the lockdown measures [16][17][18].

Flattening The Curve The original reason given for the lockdown measures was to ‘flatten the curve’. This was to ensure that our already struggling Health Care System was not overwhelmed.

The Irish people complied. However, official statistics published by the government now show that the Health Care System was at no point overwhelmed. According to the latest Daily Operations Update by the HSE at no stage have confirmed COVID-19 cases in critical care beds exceeded 160 and numbers have been declining since the 10th of April. As of the 10/05, only 72 of the 257 critical care beds are occupied by COVID-19 patients. [19]

The government has taken over private hospitals at an expense to the taxpayer of €115 million a month, yet these hospitals are operating at only 33% capacity [20]. The fall out from this is that private consultants are no longer able to see their patients and many are referring to the “tsunami” of deaths and health repercussions that are imminent.

Has the government carried out an impact assessment on these actions?

Treatment Versus Vaccines We have concerns about the government’s repeated emphasis on the need for a vaccine. The government has just contributed millions of the taxpayers money on the development of experimental vaccines which are being rushed to market. The manufacturers of these vaccines are looking for indemnity[21], in other words, they cannot be sued if a person suffers an adverse reaction which can include death and lifelong health conditions.

We oppose any moves by the government to mandate these vaccines or to make them a condition of return to normal life.

According to Dr. Marcus de Brun, herd immunity is not the enemy, it is a natural and inevitable part of the process [13]. Once some 60-70% of a population have been infected and recover, existing infections are unlikely to spread within that population. Professor Knut Wittkowski says that “Earlier containment of low-risk people merely prolongs the time the virus needs to circulate until the incidence is high enough to initiate herd immunity” and that herd immunity is what ends infectious diseases.[22] Professor Raoult, the number one global expert on communicable disease and his work is showing that it is treatable [23].

Thank you for your support
openpetition.eu/!endlockdownireland

The contra argument is based on a number of false assumptions: - That lockdown measures save lives (they demonstrably do not in all research done) - That lockdown does not cause a loss of life (it demonstrably does ) - The measures where based on a false premise and thoroughly debunked computer modelling presenting the virus as a deadly threat when its IFR is roughly equivalent to a moderate flu season (confirmed by Oxford University) As such lifting lockdown will not only save a significant amount of lives but also help reduce some of the enormous collateral damage it has caused.

This would result in the loss of tens of thousands of lives unnecessarily, and it only serves to benefit the self centered, petty social and fiscal desires of a tiny minority of the populaton, who are the only ones calling for it. 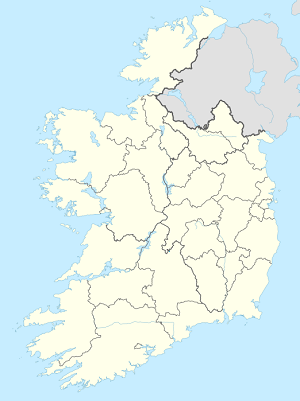 The data refers to 509 statements.