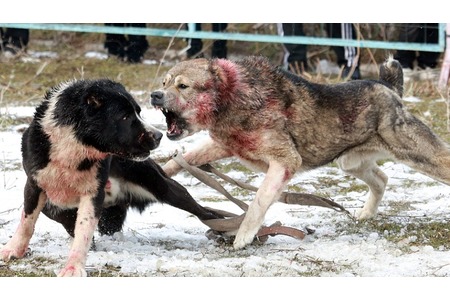 Petitioner not public
Petition is directed to
Mayor Albek Ibraimov
107 Supporters
Petitioner did not submit the petition.

Dog Fighting, to westerners, will always be shocking, as it now only reserved for the cruellest of people and will most likely end in a prison sentence or fine. However, in Kyrgyzstan, dog-fighting is so common, especially in the capital city of Bishkek, that spectators (including children) stop to watch the show. This particular type of fighting is conducted in order to see which breed of Wolf Hound is superior to the rest and 'the champion breed', and will then be paired with another breed of dog called an Asian Shepherd to breed. Kyrgyzstan, a country in Central Asia, has no animal-welfare laws, and also welcomes 'aqua circuses' that contain dolphins and beluga whales, so it is no surprise that nobody bats an eyelid whilst walking past a dog fight. This 'sport' should no longer exist, and the people in charge of this city, and country, need to step up.

'Sports' like this one are medieval and barbaric, and do not belong in the civilised world that we live in today. I strongly believe that implementing stricter consequences for activities like this will be the beginning of an animal rights uprising in this country, and will cause people to stop and ask themselves why so many people are disgusted and upset by this cruelty.

Thank you for your support
openpetition.eu/!qqmhj The data refers to 13 statements.