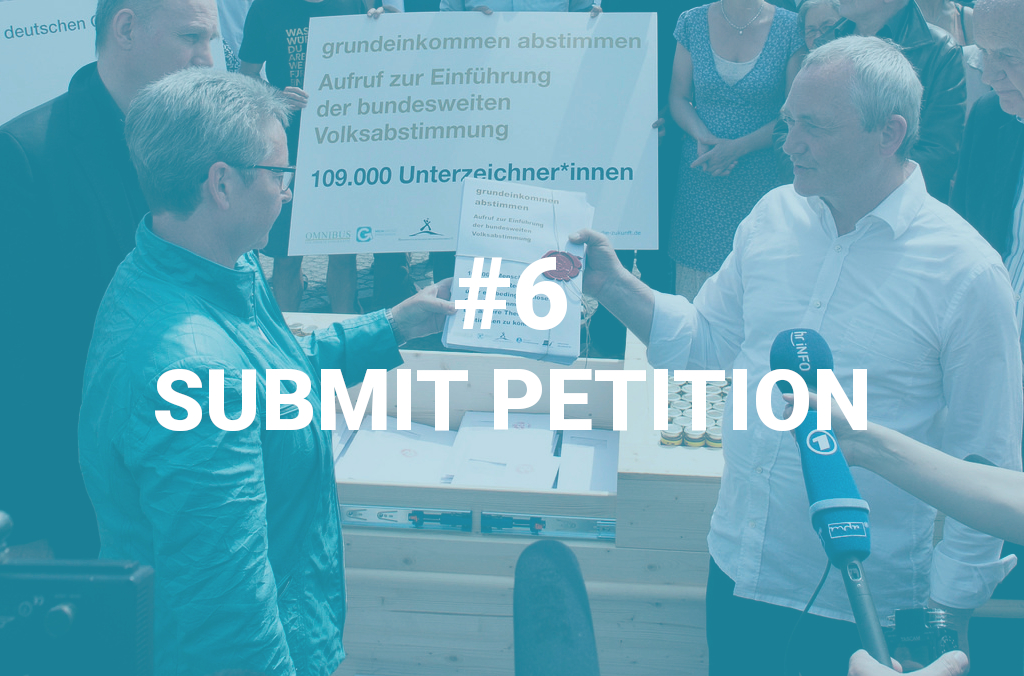 The handover of your petition should be a high media event. You can take this opportunity to draw the general public's attention to your concern and thus put pressure on the decision-makers.

Ask for an appointment for the handover in good time. Politicians' diaries are usually full. So allow a few weeks lead time.

If the addressee declines the appointment, suggest a new one and, if necessary, contact a deputy, spokesperson or department head. Before a handover fails, it is better to find another suitable person. In the previous chapter we also described how you can increase the pressure so that there is a personal handover with public figures.

Appointments with politicians and public figures are of interest to the press, especially when they are confronted with challenging or sensitive topics. Invite the press and photographers a few days in advance and briefly describe what will happen and whether there is a photo opportunity. You can use a press release this. Include a link to the petition.

If you can provide a good photo opportunity, the press will be more interested in your story and cause. TV stations don't send out camera crews when there's nothing to see. A couple of suggestions:

With a poster, for example, you always generate attention and you are a popular motif for photographers in the press. You may use the openPetition logo for this: Logo with a white background , Logo without background color

Report on the handover, the demands of the petition, the number of supporters, and what you will do next. The press release should be in the editorial offices by early afternoon at the latest so that it can appear the next day. Be sure to give a contact person with a telephone number so that you can be reached for questions and maybe even give an interview. Tips on Press release .

What if nobody wants to take your petition?

Make the best of the situation. Company bosses who refuse an appointment to hand over a challenging petition are therefore interesting for the press. Make a handover anyway! Rent, for example, a room in the town hall or state parliament, or look for a representative location in front of the company headquarters. Present the signatures on behalf of an empty chair - this shows that your concerns are being ignored and puts pressure on the decision-makers. To do this, invite the press and photographers.

Let your supporters know that you've turned over the petition and what will happen next. The people who signed for their cause want to know what happened to the petition - after all, it's their petition too. Blog post on your petition page and send an email update. Be sure to change the status of your petition accordingly.

In addition to the symbolic handover, petitions that have a political issue should also be officially submitted to the respective petitions committee! You can also submit petitions at the municipal level at the state level. In most cases, however, it is more expedient to talk to mayors, city councils or municipal councils. Ask for an opinion and a symbolic handover.

You can usually submit your petition by post or using an online form. Make sure to point out your openPetition (with the short link) and the number of signatures.

Right of petition in Switzerland

According to the federal constitution, every person in Switzerland has the right to address a petition to an authority. The authority must take note of the petition. Signatures can be collected both on paper and online. There is no quorum, no minimum number of signatures and no time limit. In the case of petitions at federal level, the petitioner must contact the Political Rights Section of the Federal Chancellery at least two weeks before the planned submission of the petition and make an appointment. This is absolutely necessary because a petition at federal level can only be handed over on the federal terrace in Bern. In a picturesque setting, petitions are often presented to the Federal Chancellery with media coverage accompanied by representatives of the press. Each canton has its own procedure for petitions at canton level.

is another instrument for citizen participation in Switzerland. It is also carried out as a collection of signatures. At the federal level, however, a popular initiative can only refer to the federal constitution. It can only be initiated by citizens with voting rights and is also accompanied by stricter rules than a petition. If these are met, there is a nationwide referendum.

The right of petition is anchored in Article 44 of the EU Charter of Fundamental Rights. A petition to the European Parliament can be submitted by any EU citizen and any legal or natural person based in the EU. The prerequisite, however, is that the subject of the petition must fall within the competence of the EU and that the petitioners are directly affected by it. The petition can set out an individual request, complaint or comment on the application of EU law. The European Parliament can also be asked to give its opinion on a specific matter. Such petitions give the European Parliament the opportunity to respond to violations of the rights of a Union citizen by a member state or an EU body.

After the handover, continue to work on getting your request through. Stay in touch with the recipients, the press and your supporters. During the handover, take photos and videos and publish them on social media, showing your commitment and keeping your cause public.

With regular posts in the petition's blog, you can keep all supporters of your petition up to date, announce events, communicate progress or report the success of a petition. This function is still possible for a period of one year even with closed petitions. Also update the status of your petition so that supporters know when it has been submitted and if it was even successful!

Support from openPetition: We are at your side in all of these steps. It is important that you keep us up to date. If we notice that you are very committed, then we are also committed to you. For example, if we learn of a planned handover, we can advise you and, if necessary, draw your attention to it through our channels.